On Monday CONCACAF revealed the first details of its new CONCACAF League of Nations tournament, which will begin with qualifying play in September of this year.

The US national team and its five opponents in the hexagonal round of qualifying for the 2018 FIFA World Cup will not have to play any qualifying matches and be automatically seeded into the top six spots in the federation's new CONCACAF Ranking Index. The remaining 34 nations eligible for the tournament, including the Canada national team, will play four qualifying matches during international windows between September of 2018 and March 2019.

The results of those matches will be used to inform and change the current Ranking Index, which in turn will be used to seed the actual League of Nations tournament proper. 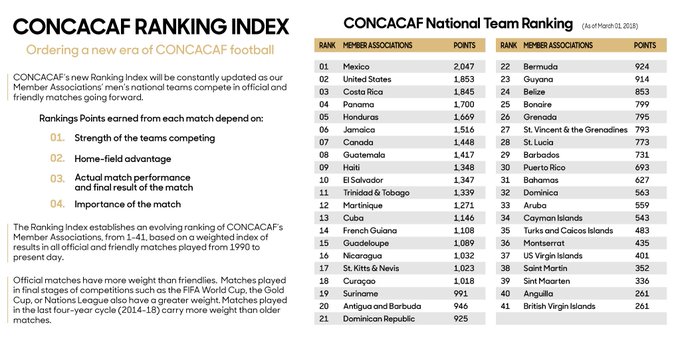 To schedule matches, the 34 teams have been seeded into Pots A through D based on the preliminary Rankings index, and will play against teams from every pot in one of their qualifiers. Canada is seeded into Pot A as one of the top eight teams in qualifying.

The full format of the CONCACAF Nations League will be revealed at the launch event at 10 am on Wednesday, March 7 in Miami, which precedes the Nations League Qualifying draw. The event will be transmitted live on CONCACAF platforms, including concacaf.com.

A computerized pre-draw has produced a Master Schedule for Nations League Qualifying, creating 17 fixtures for each of the four FIFA match windows that allow for a competitively balanced four-match fixture list for each nation, including two matches home and away.