COLUMBUS – The Columbus Crew today announced that it has reached a new multi-year agreement with Time Warner Cable SportsChannel to become the television home of the Black & Gold. This groundbreaking partnership comes ahead of the club's 19th season in Major League Soccer, providing Crew fans with an unprecedented level of depth and access surrounding the team. The deal includes enhanced pre and post-match coverage for all Crew matches, with Time Warner Cable SportsChannel becoming the dedicated home for all non-nationally televised MLS contests. The agreement also includes a wide array of Crew programming and original content, providing fans with unmatched coverage of the Black & Gold. Per MLS and club policy, specific financial details of the agreement were not disclosed. 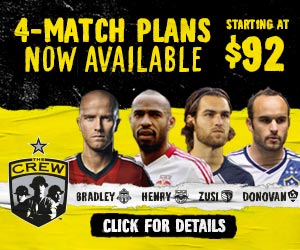 “We are extremely excited to launch this partnership with Time Warner Cable Sports. Our new partner has made a substantial commitment to the Crew, in particular the development and delivery of compelling Crew programming throughout the region,” said Crew President Mark McCullers. “We’ve seen the type of programming that Time Warner Cable Sports has created with other MLS clubs, and Crew fans can expect some very unique content from this partnership. This new agreement represents the most comprehensive television package our club has ever had.”

“We’re thrilled to partner with the Columbus Crew to produce live games and extensive original programming for the next several years,” said Vince Jones, Director of Local Sports for Time Warner Cable. “Crew fans are incredibly passionate and we’re happy that Time Warner Cable SportsChannel is now the team’s exclusive regional TV home. The network will take fans behind-the-scenes of the Black & Gold and closer to their favorite team than they’ve ever been before.”

Back for his 19th season as the Voice of the Columbus Crew, Dwight Burgess reprises his role as play-by-play commentator for Time Warner Cable SportsChannel’s coverage. Burgess brings a wealth of experience to his role, including more than three decades of soccer-specific broadcast experience. Burgess is partnering with Chris Doran, back for his second season with the Black & Gold as a television analyst after joining the club’s on-air team in June of 2013. A soccer broadcasting veteran with 15 years of MLS-specific experience across multiple platforms, Doran was a sideline reporter on Chicago Fire telecasts for four seasons before moving into an analyst role with the team from 2007-2010. Since that time he has worked in various roles for FOX Sports and the Big Ten Network.

Rounding out the Crew’s talent staff is Ashleigh Ignelzi, who returns for her sixth year on the sideline for Black & Gold broadcasts. Digital Host for TheCrew.com, Ignelzi has covered MLS and international soccer for FOX Soccer, Sky Sports and FOX Sports Ohio, as well as college football and basketball for the Big Ten Network, Time Warner Cable SportsChannel, the NFL for FOX NFL Sunday and professional golf, football and basketball for ESPN the Magazine.

Time Warner Cable SportsChannel’s full lineup of Crew content and original programming will be released at a later date. This upcoming content will explore all facets of the club’s culture, from in-depth player profiles and magazine-style features, to unique shorts that examine the Black & Gold’s new era under Chairman Anthony Precourt and Sporting Director and Head Coach Gregg Berhalter, along with historical narratives centered upon the club’s origins and rich tradition.

Time Warner Cable SportsChannel is a 24/7 network that carries distinct regional programming on different channel locations across the nation. It is Ohio’s home for comprehensive local sports content, including Columbus Crew and Mid-American Conference live games and programming, and can be found on Time Warner Cable channel 1311HD/311 across the state, as well as on channel 510 in the portions of the Columbus area that are former Insight customers and on channel 511HD/510 in the northern Kentucky portions of the Cincinnati metropolitan area that are former Insight customers. For more information, visit www.twcsportschannel.com and follow the network on Twitter via @TWCSportsOH.

The Crew begins its 19th campaign in Major League Soccer this weekend, with the 2014 season beginning on Saturday, March 8 at D.C. United (7:00 p.m. ET), with Dwight Burgess and Chris Doran onsite at RFK Stadium to call the action from the Nation’s Capital for Time Warner Cable SportsChannel. For more information on catching the Black & Gold in 2014 – visit TheCrew.com/tickets. Single-match tickets for all Crew regular-season home games in 2014 are now on sale.

ABOUT THE COLUMBUS CREW
The Columbus Crew is Ohio's Major League Soccer club. Owned and operated by Precourt Sports Ventures (PSV), and one of the League's Charter Members, it won its first MLS Cup championship in 2008, and has also won the 2002 Lamar Hunt U.S. Open Cup and MLS Supporters’ Shield titles in 2004, 2008 and 2009. 2014 is the Crew’s 16th season at first-of-its-kind Crew Stadium, the first topflight soccer-specific facility built in the United States. Founded by the American sports pioneer Lamar Hunt, the club was purchased by PSV on July 29, 2013 as part of the privately held investment and management firm’s sports and entertainment business enterprise.