Following a 2-0-0 start to the 2014 season, Gregg Berhalter and the Crew head to Seattle for the club's match with Sounders FC on Saturday (10:00 p.m. ET / Time Warner SportsChannel) with the same mindset they've carried into their previous two matches: playing the Black & Gold's style and imposing its will on the opposition. 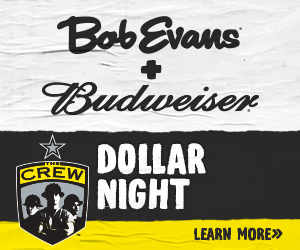 "We try to approach all the games in a similar fashion," the Sporting Director and Head Coach said. "We want to go out there and compete and play our game, try to force our game on the opponent. We're going to do the same in Seattle. It's a good test for us to see if we can do that. We might not be able to, but it'll be a good chance to try."

The Crew will be faced with a tough environment at CenturyLink Field as Sounders FC has drawn nearly 40,000 fans in its first two home matches this season. The Black & Gold have shown they can silence the Seattle crowd in the past, as they topped the Sounders 2-0 in their last visit to the Emerald City.

"It's going to be exciting," midfielder Wil Trapp said. "There's going to be a lot of fans, lots of noise. They're going to be fired up. We just have to play our game and be confident in what have on the field and stick to our gameplan.

Berhalter will have nearly a full side at his disposal as Matt Wiet and Daniel Paladini are the only injured players on the Crew roster. However, Seattle will be without start playmaker Clint Dempsey. The U.S. Men's National Team forward will serve the second of a two-match suspension for violent conduct on Saturday.

Despite Dempsey's absence, Berhalter knows his team will have its hands full against the Sounders' other Designated Players in Osvaldo Alonso and Obafemi Martins.

"[Seattle] is a good team," he complimented his opponent. "They're an experienced team. They've been together a while, a lot of the guys. Playing at home, they have a really strong crowd. We know it's going to be a difficult game. Alonso is probably one of the better midfielders in the League. It will be a good challenge for us."

Added Trapp: "They have a lot talented players and good finishers as well. We have to be compact and hopefully kind of quell what they have with Alonso in the middle and [Kenny] Cooper and Obafemi [Martins] up front."